National Pit Bull Awareness Day was established as a day to educate and foster positive communications and experiences in the communities in which we and our dogs live. It is a special day to focus on these incredible dogs and their devoted, responsible owners; a day to change perceptions and stereotypes.

In 2021: Our 13th anniversary couldn’t have been any luckier! Thanks to our amazing supporters, Love-A-Bull’s 2021 Virtual Silent Auction saw us nearly DOUBLE the proceeds earned from the previous one—at a whopping $7,300+! We then kicked off Howl-o-ween with a spooky costume party at Yard Bar. 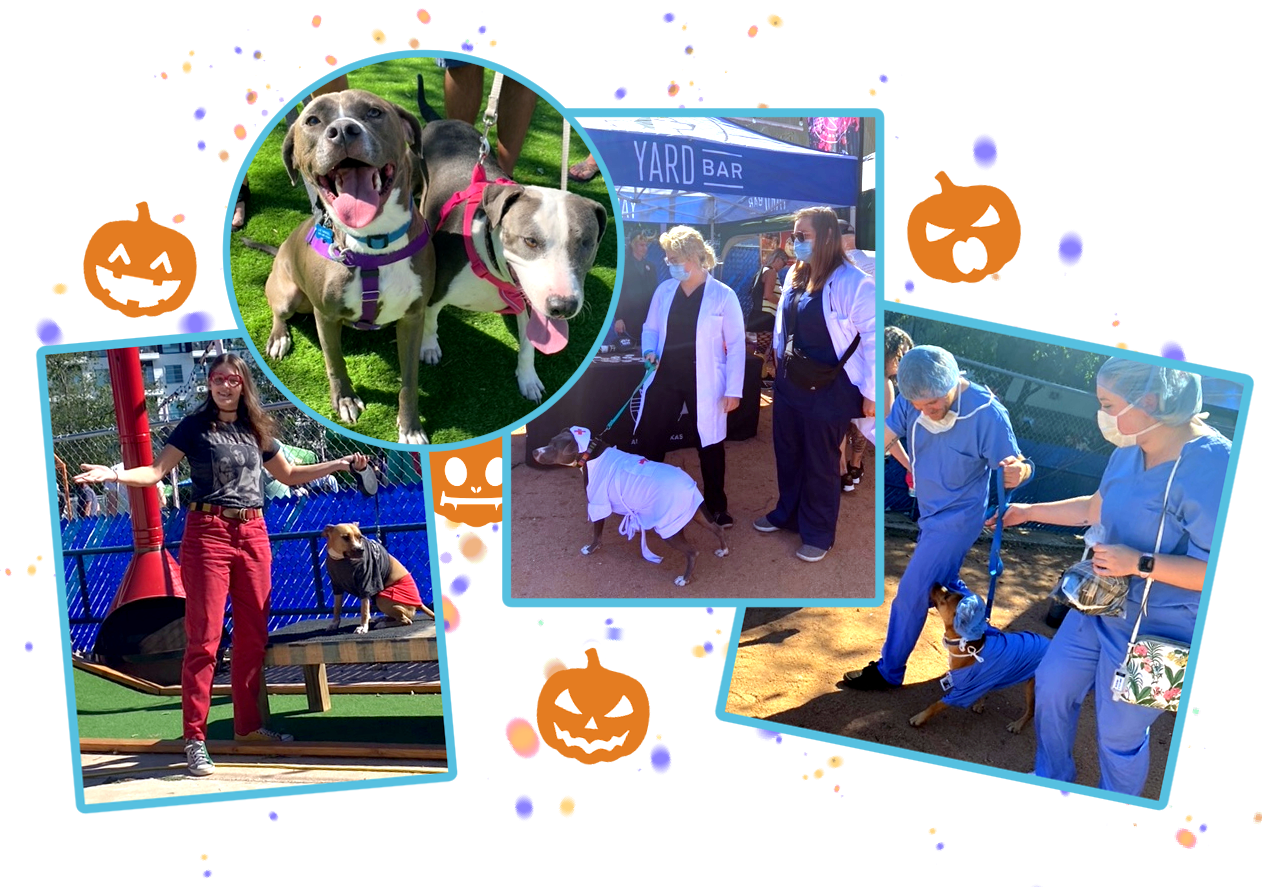 In 2020: Love-A-Bull celebrated its first completely online PBAD due to the COVID-19 pandemic. We hosted an incredibly successful virtual Silent Auction, which brought in $4,000, as well as participated in a virtual Strut Your Mutt fundraiser that brought in $1,000 social media grant and another $700 in donations to help save more pit bull-type dogs.

In 2019: We celebrated PBAD this year with our friends at Circle Brewing, and had a giveback Pints for Pits night plus vendors and games for kids.

In 2018: During this year, we celebrated our 10th anniversary as a nonprofit organization! We hosted a popular Pints for Pits event in honor of PBAD in late October, then celebrated our anniversary with a HUGE casino night the following month.

In 2017: In October 2017, Love-A-Bull hosted another Chloe’s Clinic to celebrate PBAD, in addition to Pub Run earlier in the month and a Peace, Love and Pitties Party at The Buzz Mill. We also kicked off PBAD in proper style with our Monthly Pittie Fun Walks on the first Sunday of every month!

In 2016: Love-A-Bull celebrated PBAD at the beautiful Rosewood Park in East Austin. Due to a generous donor, we were able to host our very first Chloe’s Clinic and offered the community FREE vaccinations, microchipping and spay/neuter vouchers, along with FREE dog food and a leash exchange. We had the wonderful and talented Deb with 101X as our emcee and the community enjoyed lively demonstrations from Sit Means Sit, Zoom Room, Flying Disc Dogs of Austin and a special presentation from Officer Mullenax and former Adopt-A-Bull Peaches, who is now a narcotics detection dog.

In addition, we had a dog walk, Silent Auction, costume contest, great swag and vendors, and Kiddie Corner, where our Pit Crew Therapy dog teams were able to interact with families and children.

In 2015: Unfortunately, due to Hurricane Patricia, we had to postpone our annual PBAD event.

In 2014: Our Sixth Annual TSPP Weekend brought hundreds of pups and their families to show their pittie pride with a parade up Congress Avenue to Republic Square Park. There, a free festival with vendors, games, contests, music, a silent auction, training demos and mini-clinic was held. We also hosted an online contest with thousands of photos submitted to vote for our official prom king and queen. The winners, rescue pups King Porky and Queen Nani, were Grand Marshalls in the parade!

In 2013: Love-A-Bull’s Texas-Sized Pittie Pride 2013 events celebrated FIVE years by continuing the tradition of raising awareness, bringing together dog lovers of all kinds and honoring our four-legged friends with the theme “All Dogs Are Created Equal.” LeRoy Golden’s canine stars Bruzair, Justice and Karma amazed and entertained with another fantastic Frisbee demo. The parade and festival drew hundreds of participants, and our costume contest was a bit hit. A Wellness Clinic included a full array of resources and services including access to veterinarians on-site, discounted heartworm check vouchers, free microchips, free spay/neuter appointments and leashes, collars and other supplies. Our Pittie Kissing Booth featured Pit Crew dogs giving love to visitors, and a Q&A included Pit Crew trainer Crystal Dunn, who demonstrated some therapy dog work for the crowd.

In 2011: Love-A-Bull welcomed special guests from all over: BAD RAP co-founders Tim Racer & Donna Reynolds, musician John Shipe, actress Holly Marie Combs, YouTube sensation Sharky and Karma the Flying Pit Bull with brothers Bruzair and Justice. The Pit Crew, Sharky & mom Helen, plus Love-A-Bull co-founders in a pedicab led the huge gathering of families and their pit bulls – some in excellent costumes – that paraded up Congress Avenue arriving at Republic Square to over 65 businesses, rescue groups and food vendors set up in the park. Deb O’Keefe, local host of the 101X radio morning show and guardian of a pit bull named Blue, was our emcee for the event.

In 2010: Love-A-Bull hosted animal welfare crusaders Rescue Ink and Shorty “Pit Boss” Rossi (from Animal Planet’s “Pit Boss” TV show) as Grand Marshals of the Pit Bull Parade up Congress Avenue, which drew upwards of 1,000 four-legged participants (pit bulls the vast majority of them) and 3,000 two-legged participants. Over 60 vendors and rescue groups set up booths at the Fun Fest, which also featured training demos, Q&A with special guests, games, giveaways, contests and a silent auction. The event generated news coverage on all local, several regional and a handful of out-of-state news outlets (including cnn.com). Love-A-Bull was also featured prominently in the episode of “Pit Boss” filmed at our event, which aired nationally.