by Ruth Nobile on March 1, 2021 in Adoption, Foster, Highlight, Story 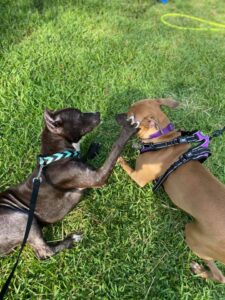 Clayton and Lena as puppies!

Guest post by Kristin Henn, in honor of Amplify Austin for Love-A-Bull

In the fall of 2019, as my teenage daughters were becoming increasingly independent, I began to daydream about a puppy. We had adopted adult dogs in the past, but something about my children getting older made me think I was ready for the challenges and rewards of a new baby … so we started talking about puppies. Growing up, my older daughter was fond of a neighbor’s pit bull and had always declared that she wanted one of her own someday. Thus began our research into both the breed and rescue organizations. 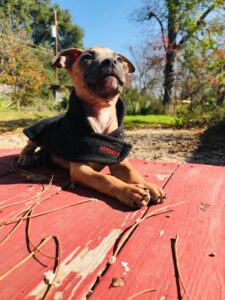 There are countless groups who do amazing work in this field, but something about Love-A-Bull’s approach hit home for us. The obvious care and thoughtfulness toward both the dogs and the people interested in adopting, combined with a good-humored approach to outreach made us decide that they were a good match for us. So we began checking for updates VERY regularly and were delighted when a litter known as “The Spice Puppies” became available for adoption. Honestly, our puppy fever was at such a pitch by the time they were available for meetings, we would have been happy to take any of them home. However, when we got to the foster’s house, Lena (formerly known as Clove) stood out from her siblings as a thoughtful, careful little dog who looked you right in the eye and proceeded with good sense. She was a tiny puppy with giant ears who wiggled up into your lap and sat with a calm solidity. In photographs, she looked as though she were running for office.

Lena remains the warm and delightful baby of the family. Out in the world, she turns around and looks you straight in the eye for guidance and at home sleeps as far under the covers as she can. She patiently waits for a friendly moment with the cat or a calm hangout with our elderly poodle and greets her people with enthusiasm and delight. It is beautiful to see how effortlessly she runs and jumps, the very picture of grace and agility. We love her so much, it’s almost as if the months of potty training and teething never even happened …

The pandemic occurred very early in Lena’s life, so she has lived with a human being available to her at almost all times. When summer 2020 came around, she was very much a teenager and wanted to play more than the boring humans around her were willing to. We decided that fostering would be a good way to help the dogs Love-A-Bull works with and give Lena someone to wrestle with.

We took in two goofball puppies delivered directly to us from a shelter. Beyond the normal challenges of puppy care, they were both recovering from their time in the shelter and we were reminded that a puppy is in fact a baby and needs constant care. Lena, to our great amusement, regarded them as a couple of crazy delinquents who clearly did not understand the basic rules of civilized life. We kept telling her, “two months ago, you were just like them!” But they were very sweet, and in the time they were with us we became fond of them and were grateful to have helped them on their journey. 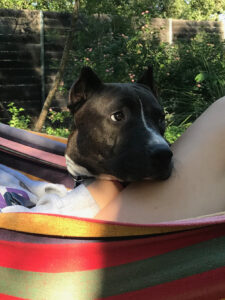 After the puppies were adopted, we decided that we wanted to continue fostering, but that a dog roughly the same age as Lena would be a better fit. And that’s when Clayton the Tripod entered our lives.

I guess you never know when you’re going to fall in love, but from the minute I met Clayton, I knew he was a very special dude. To begin with, he was a joyful mess. Only about 6 weeks out from a rear leg amputation, his coat was dull, dry and patchy. He was skinny and had a smell that could knock you over, and he clearly hadn’t learned to navigate without his missing leg. But he exuded love and would drag himself into my lap to be close.

He and Lena were friends from the first minute, and the two of them remain a perfect pair. His clumsy gait, giant paws and crazy strength juxtaposed against her watchfulness, grace and flexibility makes observing their backyard wrestling matches a compelling distraction and their care and love for one another is just wonderful. He is brilliant in his own right, confident that things will be OK and always charging into the next adventure. He’s the most handsome dog I know and I don’t think I’ve ever seen a creature who relishes every moment of life the way he does.

Obviously, that was why we were foster fails within 8 days.

Beyond my gratitude to Love-A-Bull for their good work in the world and the fact that they brought me these two wonderful creatures, I want to stress that the follow-up and support that this organization provides is above and beyond anything I’ve heard of from any similar organization. Individual support has always been very available, but what really stands out is that they have created a community of adopters, volunteers and (I have to assume) fans.

I cannot stress enough how valuable and rewarding this has been. Thank you for everything, Love-A-Bull! You guys are amazing. 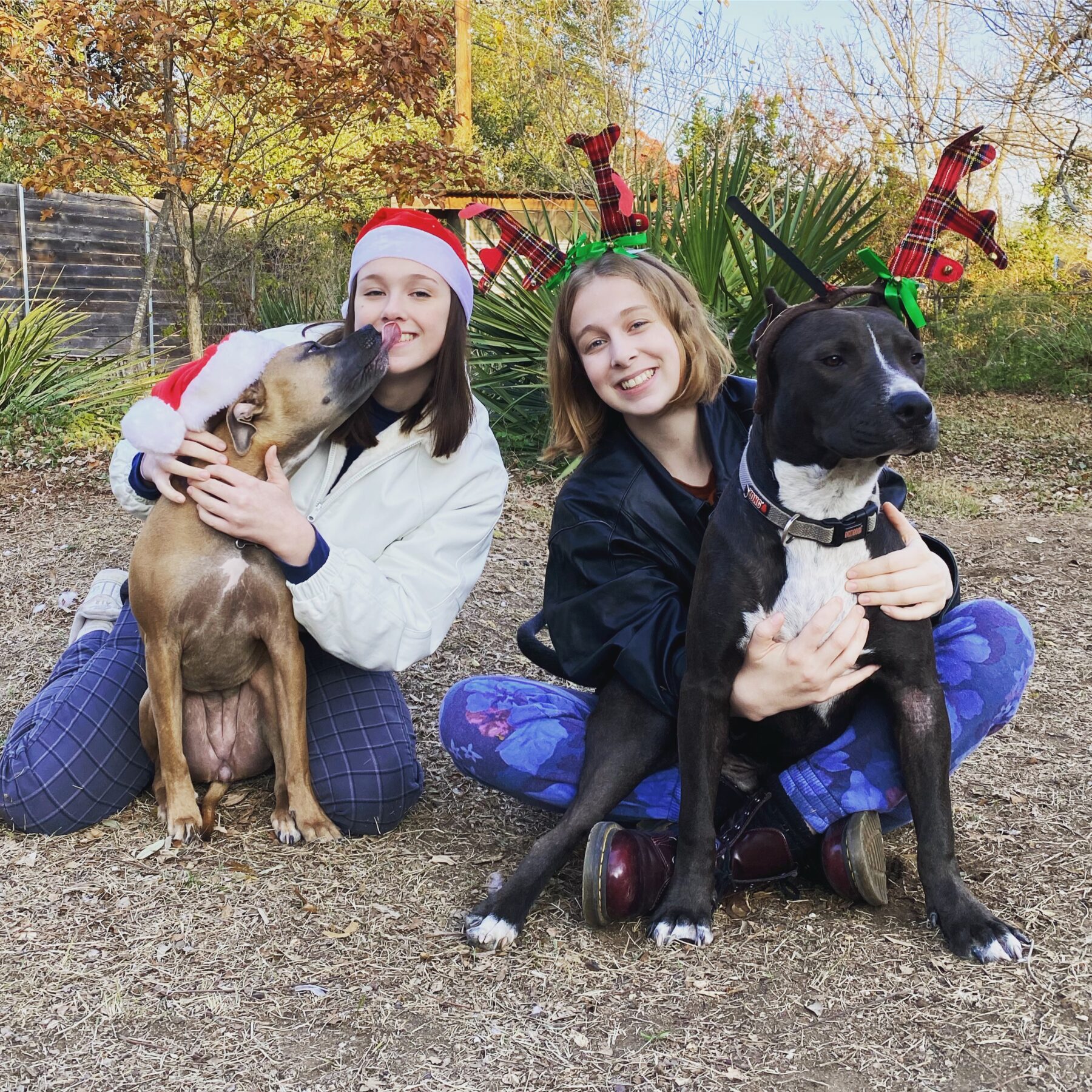 Lena and Clayton, happily fur-ever after!